Road deicing salt has been used since the 1960’s to prevent commerce disruption and accidents in cities with regular winter snow (e.g. Düsseldorf and Chicago) or freezing rain exposure (e.g. Beijing or Dallas). Total deicing salt tonnage has continued to increase worldwide and corrosion damage is not limited to highways and vehicles. Building material corrosion and premature failure is a significant and growing problem.

Road salt mists are formed as the tires of moving vehicles spray tiny particles of salt water or dry salt particles into the air. Hundreds of deicing salt studies have been done but most focused on areas close to roadways. New US research has documented seasonal deicing salt accumulations as much as 1.9 km (1.2 miles) downwind of a major highway outside of Chicago. The researchers collected data between 1997 and 2004 and produced a model (Figure 1) covering a 5 x 5-km (3.1 x 3.1-mi) area.1 It shows that sites within 100 m (328 ft) of busy roadways can be comparable to moderate to severe coastal areas. 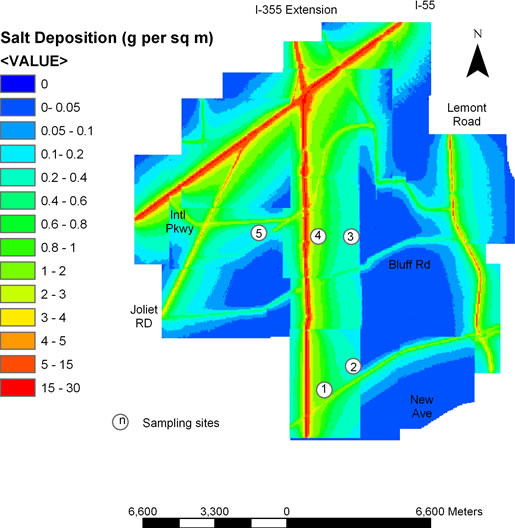 Figure 1:
Model projection of annual deicing salt deposition around highways I-55 and I-355 and small surface roads with the spacing of some test sites shown. Illinois Department of Transportation (DOT) in collaboration with Argonne National Laboratory (ANL) and the U.S. National Atmospheric Deposition Program/National Trends Network (NADP/NTN)

The researchers theorized that urban areas with busy roadways might have regional deicing salt plumes or mists for several days after a snow event. This increases total salt accumulation on buildings. In Chicago, deicing salt-related metal corrosion has been found up to the 60th floor of one tall building.2 Exposure levels are likely to be similar in any major city with regular winter snow exposure.

Internationally, it is estimated that over 60 million metric tons (66 million tons) of salt are used for deicing.3 China, which previously used very little deicing salt, has had a considerable increase in usage and recently became the world’s largest producer.

Many Europeans incorrectly assume that their deicing salt use is quite minimal, but it is actually similar to North American use. Deicing salt tonnage is increasing in both regions. For example, the salt industry association, Verband der Kali- und Salzindustrie e.V., reported that over 3 million metric tons of deicing salt were used on German roads during both 2005 and 2006, which is a 50% increase since 2002.5

The most comprehensive European study was done in 2002 when twenty countries participated in a task group that studied deicing practices. Table 1 summarizes the deicing methods used in each country, and, where available, the annual tonnage. It is evident from this and other data sources that deicing is standard practice throughout Europe.

Table 1:
Road and bridge snow and ice control procedures in countries that participated in a 2002 European study of Winter maintenance practices3

Unfortunately, many designers are not aware that deicing salt is very corrosive to architectural materials, and inadequate knowledge can lead to inappropriate material selection and premature failure. Molybdenum containing stainless steels are often a cost-effective choice when long-term performance, aesthetics, security, and/or minimal maintenance are important because the molybdenum alloying addition improves resistance to chloride (salt) corrosion. 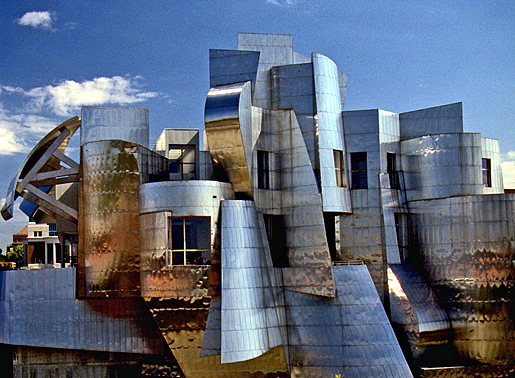 Figure 2:
Photo: Catherine Houska, Nickel Institute
The Frederick R Weisman Art Museum has a smooth No. 4 finish on its Type 316 stainless steel exterior and is easily rain-washed. Despite five-year gaps between cleanings, no corrosion staining is evident but there is some dirt accumulation.

To avoid problems, specifiers must be made aware of the severity of the deicing salt problem, comparative metal corrosion rates, and common deicing myths. This makes it necessary to provide information on both stainless steel selection and the relative performance of competitive architectural metals. For example, there is a common misconception among architects that aluminum’s corrosion resistance is similar to that of stainless steel. This is incorrect. In locations that are exposed to chlorides (coastal or deicing salt), the corrosion rate of aluminum is typically 10 to 100 times that of stainless steel. The white to grayish white color of aluminum corrosion product may not bring attention to the problem (as the rusting red of steel does), until permanent aesthetic or structural damage has been done. This lack of knowledge makes aluminum a common replacement for stainless steel when construction costs must be reduced. Figures 4 and 5 show severe aluminum corrosion in a deicing salt laden environment and provide a significant contrast to Figure 2. 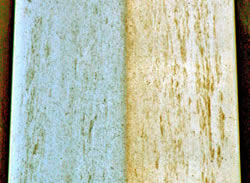 This Type 304 panel is on the second floor of a building in downtown Pittsburgh. Although it is cleaned more frequently than the building in Figure 2, it is exhibiting significant deicing salt corrosion staining. 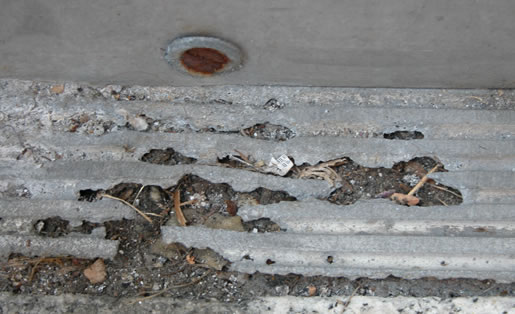 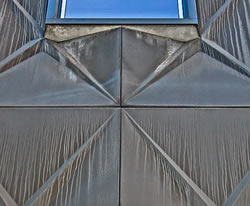 International “sustainable” design trends have made the specification of long lasting materials even more important. Most of the world’s major population centers are exposed to coastal or deicing salt or both. IMOA has developed and posted a new web article on the international impact of deicing salt (see www.imoa.info). It contains the information shared in this article as well as a more in-depth discussion of the relative performance of competitive materials. IMOA is providing decision makers with the information necessary to understand the problem and justify the use of high performance Mo-containing stainless steels.

More information can be found in our publication:

Additional Literature
The Swedish Corrosion Institute and Outokumpu conducted research to determine the performance of various stainless steels in locations that are exposed to deicing salt. The samples were placed in tunnels, on bridges, and alongside roadways.

Acom 2008 Ed:1 "The Suitability of Stainless Steels for Road Constructions"