The nominal compositions in weight percent of some of the commercially important alloys of each type are given in Tables 1 and 2.

In corrosion resistant nickel-based alloys, molybdenum imparts resistance to nonoxidizing environments such as the halide acids (HCl, HBr and HF) and sulfuric acid, for example. Accordingly, the alloy most resistant to these environments is B-3 alloy which contains 28.5% Mo. Molybdenum also acts in conjunction with chromium to provide resistance to localized corrosion attack such as pitting and crevice corrosion. Alloys such as C-22 and C-2000 are particularly resistant to this type of attack.

In the case of high temperature alloys, additions of molybdenum are often used to impart resistance to damage caused by high temperature creep. For the solid-solution strengthened alloys, advantage is taken of the fact that molybdenum diffuses very slowly in nickel. Since high temperature creep is generally diffusion controlled, additions of molybdenum are quite effective in reducing creep rates. In the age-hardenable alloys which utilize the precipitation of gamma-prime, Ni 3(Al,TI), molybdenum additions strengthen the martix and reduce the lattice mismatch between the martix and the gamma-prime particles, thereby improving the stability of the precipitates. The effect of molybdenum in 242 alloy is quite unique. Its specific combination of molybdenum and chromium promote the formation of long range ordered Ni 2(Mo,Cr)-type particles which impart significant strength without significantly reducing ductility. Molybdenum additions are also very effective in reducing the coefficient of thermal expansion.

Alloys such as S and 242, which contain large amounts of molybdenum, find use as seal rings in gas turbine engines in order to exploit this effect. The high temperature alloys are extensively used in gas turbine engines for components such as turbine disks, combustors, transition ducts, turbine cases, seal rings, afterburners parts, and thrust reversers. They are also used in applications involving industrial heating, heat treating, mineral processing, heat exchangers, and waste incineration. 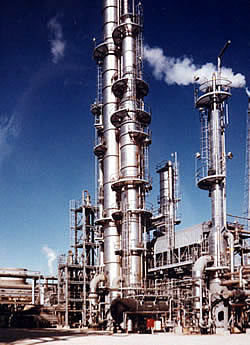 Chemical plants make use of Moly grade nickel base alloys (up to 28%Mo) for their unique corrosion resistance.
(Courtesy of Haynes International)