Molybdenum has been the key alloying element used to develop creep-resistant ferritic steels for service temperatures up to 530 °C. Products and components made of high-temperature steels include 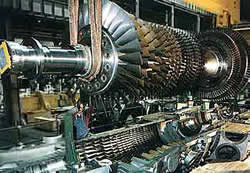 The main application areas of creep-resistant steels are power generation and petrochemical plants, which use all product forms. Steam turbines require large forgings and castings, whereas pressure vessels, boilers and piping systems require tubes, pipes, plates and fittings. In addition to high creep strength, other material properties like hardenability, corrosion resistance, and weldability are also important. The relative importance of these properties depends on the specific application. For example, large turbine rotors require steels with good hardenability, whereas power plant tubing and piping must have good weldability. Even so, the alloys used in these different applications employ the same mechanisms to improve creep strength.

Molybdenum in solid solution reduces the creep rate of steel very effectively. It slows the coagulation and coarsening (Ostwald ripening) of carbides during high-temperature service. The best results in terms of elevated-temperature strength are obtained by quenching and tempering to produce a microstructure consisting of upper bainite.

Improved thermodynamic efficiency is the goal that drives the development of power plant technology, and it requires both improved plant designs and new steels with better properties to support those designs.

While the efficiency of sub-critical plants is less than 40%, Figure 1 shows future ultra-super-critical (USC) plant efficiency is expected to exceed 50%, cutting CO2 emissions per kilowatt-hour-produced energy almost in half.

Figure 1. Effect of operating conditions on efficiency and emissions of steam power plants.

Creep-resistant ferritic steels continue to be the materials of choice for power plants, oil refineries and petrochemical plants worldwide. They are classified into CMn steels, Mo steels, low-alloy CrMo steels, and 9-12%Cr steels. Because of the large number of different steel grades, Table 1 includes only a few representatives typical of each group.

The variability of chemical composition among the alloys produces a complexity in microstructure, resulting in different strengthening mechanisms among the alloys, and creep-rupture strengths that vary by an order of magnitude.

Grades P235 and its Nb-microalloyed variant P355 are typical CMn- steels having a ferrite-pearlite microstructure. Carbon and manganese are the alloying elements that most strongly influence the strengths of these steels. The Nb addition in P355 refines the grain size and results in higher yield strength compared to P235, but the increase of creep-rupture strength is rather small, as shown in Figure 2(a). Both steels reach their application limit at 400°C.

In Mo steels, the solution hardening provided by 0.3% molybdenum is the main cause for the increase of creep rupture strength shown in Figure 2(a). 9NiCuMoNb5-6-4, widely known as WB 36, shows a dramatic increase of yield strength over 16Mo3, partly caused by niobium’s grain-refining effect. Additional hardening by copper precipitation also increases the yield strength.

The variability of chemical composition among the alloys produces a complexity in microstructure, resulting in different strengthening mechanisms among the alloys, and creep-rupture strengths that vary by an order of magnitude.
Grades P235 and its Nb-microalloyed variant P355 are typical CMn- steels having a ferrite-pearlite microstructure. Carbon and manganese are the alloying elements that most strongly influence the strengths of these steels. The Nb addition in P355 refines the grain size and results in higher yield strength compared to P235, but the increase of creep-rupture strength is rather small, as shown in Figure 2(a). Both steels reach their application limit at 400°C.

Molybdenum’s strengthening potential cannot be used fully, since creep ductility decreases strongly with increasing molybdenum content. Another limitation in the application of Mo steels is decomposition of iron carbides above 500°C, known as graphitization. A solution to both problems was to alloy with chromium in combination with molybdenum. In fact, CrMo steels were the first to allow steam temperatures in power stations to exceed 500°C. The properties of the classical CrMo steels 13CrMo4-5 (T/P11) and 11CrMo9-10 (T/P22) are illustrated in Figure 2(b). The creep-rupture strengths of these alloys exceed those of the simple Mo steels by a substantial margin [Figure 2(a)] because of their higher Mo content. CrMo steels form chromium carbides that are stable above 500°C, which prevents graphitization. Chromium also improves oxidation resistance at higher temperatures. The newly developed steels 7CrMoVTiB10-10 (T/P24) and T/P23 shown in Figure 2(b) have extremely high strength properties. These alloys are based on and have a microstructure similar to T/P22. Their strengths are raised considerably by additional alloying with titanium, vanadium and boron in the case of T/P24, and tungsten, vanadium, niobium and boron in T/P23.

The increase of chromium to above 7% in CrMo steels leads to a group of steels containing martensite. This microstructure introduces a new element of structural hardening. Martensite is characterized by a high dislocation density and a fine lath structure stabilized by M23C6 precipitates. Thus, structural hardening is responsible for the large increase in strength of X11CrMo9-1, as compared to 11CrMo9-10 [Figure 2(c)]. Further improvements, especially of the creep strength, have been achieved by alloying with vanadium, niobium, tungsten and boron, as also shown in Figure 2(c). The introduction of X20CrMoNiV11-1 at the beginning of the sixties allowed major increases in power plant efficiency. The transformation behavior and microstructure of this alloy are comparable to those of X11CrMo9-1. The higher creep-rupture strength of X20CrMoNiV11-1 results mainly from the larger volume of M23C6 carbides in the microstructure, a result of the alloy's higher carbon content. The modified 9 % Cr steel T/P91 (EN designation: X10CrMoVNb9-1) invented in the USA is now used in power plants all over the world, both in new plants and in refurbishment work of high-pressure/high-temperature piping systems. Although the carbon content of T/P91 is lower than that of X20CrMoNiV11-1, its creep rupture strength is distinctly higher. This improvement is achieved by alloying with vanadium and niobium. T/P91 takes advantage of finely dispersed type MX Nb/V- carbonitride precipitates for additional strengthening. It was essential to balance the alloy’s composition because the optimum MX-precipitate dispersion and particle size can be achieved only by optimizing the Nb/V ratio and nitrogen content. Subsequently, new steel grades like X11CrMoWVNb9-1-1 (T/P911), T/P92 and T/P122 have been developed based on T/P91. These grades represent the current state of development for creep-resistant ferritic steels.

Ferritic steel grades appear to reach their limit at live steam temperatures around 620°C. Future USC power plants will need to use austenitic steels and, more likely, superalloys like Inconel 617 in areas of the highest temperatures (Figure 3). Such alloys contain up to 10% Mo.