In 1985 the suspended ceiling of a swimming pool in Uster, Switzerland crashed down into the pool and killed 12 bathers. Several years later, in 2001, a similar accident occurred in The Netherlands – fortunately in the second case during the night without casualties. The accidents were found to be caused by stress corrosion cracking of molybdenumfree Type 304 stainless steel fasteners and hangers that carried the weight of the suspended ceiling. While the standard grade stainless steels like Type 304 and the 2% molybdenum containing Type 316 perform well in many applications in and around swimming pools, they should not be used for safety-critical, load-bearing applications. Only highly corrosion resistant 6% molybdenum-type stainless steel can resist stress corrosion cracking in the aggressive environment that can build in spaces where maintenance cleaning is difficult or impossible.

Stainless steels are well established as corrosion resistant, low maintenance, construction materials in and around swimming pools. They are found in the pool water as ladders, stairs, and components of wave machines, around the pool, for example as diving boards, and as parts of the building like air conditioning systems, doors and windows. The widespread use is due to the good corrosion resistance, the attractive appearance, the good workability and an acceptable price. The formation of a thin but extremely dense oxide layer on the surface of stainless steels, the passive layer, protects the steel from corrosion. Because of their corrosion resistance stainless steels are also used in structural applications in swimming pool buildings such as for hangers and fasteners of components such as suspended ceilings, wall panels or water piping and air ducts.

To kill bacteria and viruses introduced by bathers, disinfecting agents, often chlorine based chemicals, are introduced to the pool water. The pool water chemistry is extremely complex: Chlorine reacts with nitrogenous compounds found in sweat and urine to form chloramines. The chloramines are highly volatile and are responsible for the characteristic “pool smell”. Chloramines are, due to their high volatility, spread in the whole atmosphere of the pool. They are found to be absorbed into condensates formed on the surfaces even in the most remote part of the pool building. Because these areas are not regularly washed, they can form an extremely corrosive electrolyte containing high amounts of chlorides with low pH – value over time.

This aggressive electrolyte turned out to be capable of causing room temperature chloride stress corrosion cracking (CSCC) in Type 304 stainless steel (Figure 1). This was a surprising finding, because up to the time of the first accident, it was believed that CSCC of this stainless steel does not occur below 50 to 60 °C (120 – 140 °F).

Figure 1:
Part of a suspension made of Type 304 damaged by stress corrosion cracking in the atmosphere of a swimming pool. (Courtesy of Mr Jan Heselmans, Force Technology b.v., published in “Stainless Steel World”, December 2001)

In the following years many corrosion investigation programs were carried out on this topic. In several working programs it was found that the molybdenum-free type 304 and low molybdenum type 316 can suffer CSCC under severe pool conditions. Even the Duplex stainless steel 2205 suffered localized corrosion in these conditions which can lead to significant reduction of the strength. Only the 6%-Mo stainless steels showed sufficient corrosion resistance. 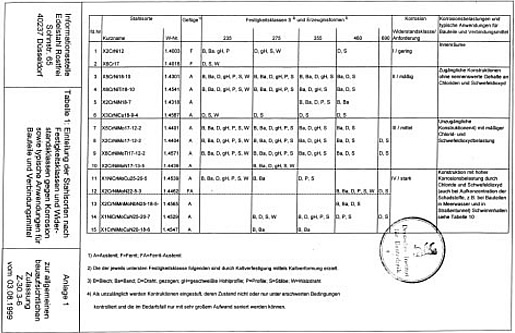 The results of the test programs have found their way into national building regulations like the German bauaufsichtliche Zulassung Z-30.3-6 from 1999 “Bauteile und Verbindungselemente aus nichtrostenden Stählen”. Figure 2 shows part of this regulation wherein four categories of corrosivity, from low to high, are defined. Category 4 “high” is used for constructions with high load of chlorides and other pollutants if concentration of pollutants can occur because the area cannot be accessed for cleaning. Under these conditions the stainless steels 1.4565, 1.4529 and 1.4547 are specified.

As a reaction to these findings, two swimming pools in The Netherlands recently changed their under-roof suspensions from galvanised steel to a 6% Molybdenum stainless steel. Figure 3 shows a fastener made completely out of alloy 926 for suspension of a ceiling construction.

Figure 3:
Hanger made of Alloy 926 for the suspension of a ceiling.

Most importantly, by using 6% Molybdenum stainless steel the safety of the swimming pool is increased. Additionally, the maintenance and repair cost and time for the pool are reduced and the time between necessary inspections is longer. This leads to shorter shut-down times and to direct cost saving because of increased revenue.

Table 1: Chemical composition and EN and UNS numbers of the different stainless steels.