Stainless steel’s growing popularity as a construction material is changing skylines in major US cities. Many of the newly completed or planned, high profile, North American building projects in trend-setting Chicago and New York are using 2% molybdenum Type 316 stainless steel.

The underside of the bean is not accessible because some seams are still being welded and polished. Figure 2 shows the Chicago skyline reflected on the Cloud Gate’s curved surface. IMOA member Outokumpu supplied the plate for this project. 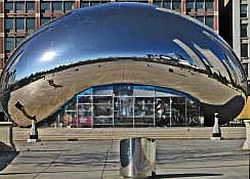 Figure 1:
Anish Kapoor’s Cloud Gate sculpture is
also known as the “bean”. The underside
will remain wrapped until welding and
polishing is completed. 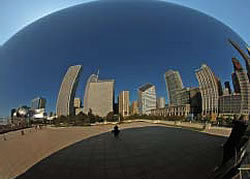 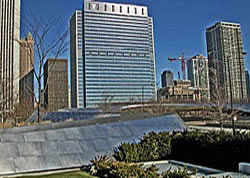 Figure 4:
Both ends of the BP Bridge have a
serpentine shape. The entire structure
is clad in Type 316 stainless steel. The
bottom floors of the Blue Cross Building,
which is directly behind the bridge, are
clad in Type 316 to prevent deicing salt
corrosion.

Figure 3:
The sweeping Type 316 exterior walls of the Jay Pritzker Pavilion band shell and the structural supports for the sound system spanning over the concert lawn. 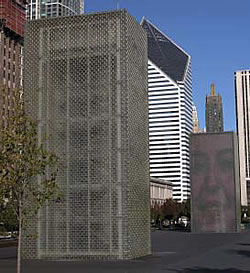 Figure 5:
The faces of 1,000 Chicago citizens are
projected on the glass block faces of the
Crown Fountain. The structural supports
for the fountain are Type 316 stainless
steel.

The glass block is held in place by Type 316 structural supports. The Type 316 tonnage used for the pavilion, bridge and fountain is not known but it is assumed to be significant.

Chicago’s recent high-profile use of Type 316 does not stop at the borders of Millennium Park. In 2005, two new adjoining Outokumpu Type 316L clad buildings were completed on South Wacker Drive. 111 South Wacker Drive was designed by Lohan Caprile Goettsch (Chicago) and Hyatt Center (Figure 6) was designed by Pei Cobb Freed & Partners (New York). These buildings are clad in about 400 tonnes of Type 316L stainless steel. The highly publicized, new Trump Tower, which is under construction, was designed by Skidmore Owings & Merrill (Chicago) and will use about 170 tonnes of Type 316 on the exterior.

Although the tonnage of stainless steel that has been or will be used for most of Millennium Park, 7 World Trade Center, and Freedom Tower is not known, about 1,400 tonnes of Type 316/316L or 28 tonnes of molybdenum have been or will be used for the other projects mentioned in this article. It is important to note that only very high profile buildings were included in this article. Many Type 316 railings, storefronts, canopies, and similar applications are specified daily in these cities.

Photo credits:
All of the images were taken by or for IMOA.

Because New York and Chicago have the largest concentrations of architects in North America, IMOA has made them primary focus areas for market education and development efforts. In a 2005 IMOA sponsored market study, contractors and architects indicated that the first tier architecture firms in these cities are now consistently specifying Type 316 for exterior applications. The use of stainless steel in exterior applications has increased significantly in these cities in the past five years. IMOA workshops and literature were cited by respondents of the survey as the reason for increased specification of Type 316 by architects.