Stainless steel is commonly used for the restoration and renovation of buildings and structures. Because it is often deliberately hidden behind or within walls, floors and ceilings during restoration, the frequency of its use is not well known.  Molybdenum-containing stainless steels are the obvious choice for longevity in more corrosive environments such as those exposed to acid rain, industrial pollution, chlorides (coastal or deicing salt), volcanic gases, soil and rock.  The general resources below provide more detail:

The widespread use of stainless steel in Venice’s preservation efforts provides examples of common restoration applications.

Molybdenum preserving venice
For centuries Venice has been fighting nature to keep itself from drowning. It is under attack from rising water, sinking ground, high tides, wind, salt water, and, more recently, erosion caused by the wake of hundreds of motorboats. In the last ten to fifteen years the maintenance team of the city has used moly-grade Type 316 and 2205 stainless steels extensively to strengthen its defense to stabilize walls, replace wrought iron handrails, upgrade service pipes, reinforce or replace bridges and other applications. In this battle, stainless steel often works behind the scenes, embedded in stone or brick. But in some cases it is in plain sight and blends in beautifully with old materials.
Download PDF (868 K, English)

Many codes around the world require the use of stainless steel for new stone and masonry construction so it is not surprising that it is used in restoration after the original iron or steel anchors have failed due to corrosion. Both stone and masonry retain moisture, creating a corrosive environment, especially when flashing fails and other drainage problems occur.  Chlorides (coastal and deicing salts) and corrosive pollutants also migrate through and accumulate in these walls and the cavities behind them, making these environments even more corrosive to iron and steel.

Stainless steel is often specified for both structural applications and flashings because of its resistance to corrosion. The restoration of the Empire State Building is a typical example.  When the environment contains salts or corrosive pollution, Type 316 stainless steel is the standard specification for both flashings and structural components.

It is critical not to use Muriatic (hydrochloric) acid for cleaning stone, masonry or tile. It is corrosive to all architectural metals, including stainless steel.  It can also damage to newer colored masonry products and grout.  There are other acid products on the market and a growing number of environmentally friendly options that are safer for the workers, building materials and environment.

The stability of a hillside or seawall can be critical in preventing damage to a site or building.  Stainless steel is the obvious choice for long-lasting ground or rock anchors. The chemistry of the soil or rock and water moving through it can have a significant influence on the corrosiveness of the service environment and anchor specification.

Although Type 316 stainless steel is commonly used, some locations with both high loads and chlorides (salts) are aggressive enough to require 2205 duplex or a more corrosion resistant stainless steel to avoid the potential of chloride stress corrosion cracking (CSCC). The soil or rock should be assessed and the advice of a stainless steel corrosion specialist obtained to make sure that an alloy is suitable.  The anchor fabrication method (machined versus cold rolled) is important in this assessment since a cold rolled austenitic is more susceptible to CSCC.

Reinforcing cliffs and walls
Type 316 stainless steel ground and rock anchors keep land from sliding and walls from tumbling. They were used recently to stabilize and reinforce a crucial sea wall in England and an unstable rock face at the Acropolis World Heritage Site in Greece. Molybdenum provides the added corrosion resistance necessary for a long service life even in the most corrosive environments.
Download PDF (1.1 MB, English)

Stainless steel bolts, wall ties and other structural components are commonly hidden within walls, floors and ceilings to hold together older buildings.  Type 316 is a common choice because the materials may be inherently corrosive or in locations where they have absorbed salts and corrosive pollutants.  Stainless steel’s performance in cyclic loading makes it an ideal choice for seismic retrofits as well.  Stainless steel’s use in restoration is not limited to buildings and structures.

Super duplex to keep the Vasa safe
A major historic ship preservation project is currently under way in Stockholm.  The galvanized and epoxy coated mild steel bolts used to hold the ship together after it was raised are failing due to corrosion. Molybdenum is a key alloying element in the high-strength, corrosion-resistant super duplex stainless steel Sandvik SAF 2507TM and Sandvik SAF 2707 HDTM bolts that will hold the great ship Vasa together to achieve a minimum design life of 100 years.
Download PDF (1.1 MB, English)

Stainless steel reinforcing bar, welded wire mesh and cable for pre- and post-tensioning of concrete should be considered for new concrete installations, replacement, and repair in chloride (coastal or deicing salt) exposure applications.   Stainless steel can be used in combination with carbon steel in concrete repair projects, when both metals are fully embedded, without concern about galvanic corrosion.

Stainless steel is not a new reinforcement material. The first known use of stainless steel reinforcing bar was the Progreso Pier in Mexico, which was completed in 1941. NACE paper 07240 documents its performance relative to a nearby carbon steel reinforced pier. Today, in corrosive coastal applications like bridges, piers and seawalls, 2304 and the more corrosion resistant 2205 duplex stainless steels are the most common choices. Types 316L and 316LN are also used.

The Hassan II Mosque in Morocco began to show structural deterioration of the carbon steel rebar only ten years after its inauguration: the concrete walls, which were built into the Atlantic Ocean, started to crumble under the steady attack of the saltwater waves. After a spectacular reconstruction, replacing large parts of the original structure and reinforcing it with 1,300 metric tonnes of moly grade 2205 duplex stainless steel, the Mosque seawall restoration should last 100 years.  Read the article Duplex rebar restores resistance to waves for more information.

Since it’s installation in New York in 1886, the Statue of Liberty has become one of the most well known sculptures in the world.  However, many people are not aware that galvanic corrosion caused structural deterioration, making a significant restoration necessary in 1986.

The original structure of the 46-meter (151-foot) statue had a framework of puddled iron consisting of three distinct components – a central pylon, secondary framing and armature bars.  The central support pylon has four legs connected by cross bracing.  A double-helix staircase rises through its center. The secondary iron framework connects 1850 puddled iron bars (51 x 16 mm or 2 x 0.625 inches) to the pylon. These iron bars create the armature support for the copper sheets.  About 1,500 U-shaped copper saddles connected the armature to the outer copper envelope sheets (2.4 mm or 0.094 inch thick and weighing 73 metric tons or 80 short tons).

Galvanic corrosion occurs when dissimilar metals such as iron and copper are placed in direct contact and there is regular exposure to an electrolyte (moisture containing salt and pollutants).  The relative position of metals in the galvanic series and their surface area ratio can be used to predict the likelihood of galvanic corrosion. See the Nickel Institute publication Guidelines for Corrosion Prevention 11 024 for more information.  Copper is much more noble than iron. The design details that led to corrosion problems on the Statue of Liberty are similar to those of some of the curtain wall and sunscreen galvanic corrosion failures that have occurred on buildings.

Designers Auguste Bartholdi and Gustave Eiffel anticipated the problem and tried to electrically isolate the materials.  Unfortunately the envelope design and subsequent modifications to it allowed rain containing coastal salt and acid from pollution to seep behind the copper.  Condensation from temperature and humidity changes and humidity also added the moisture necessary for corrosion.

The designers originally used shellac-impregnated asbestos pads and paint on the iron to separate the metals. However, both failed and galvanic corrosion began to occur.  At least 10 paint coatings were applied to the copper over the 100-year period and then layers of paint were applied to both the copper and iron to try to extend the structure’s life.

Severe corrosion of the iron armature had occurred by 1981 and it’s expansion due to corrosion also caused copper damage. Molybdenum-containing Type 316L stainless steel was chosen to replace the entire iron armature of the statue except for a few bars in the right sole of the foot. It was selected because no galvanic corrosion problem would be expected between copper and stainless steel in this type of environment and their coefficients of thermal expansion are the same.  Although it was not needed based on the environmental conditions, skived Teflon was used between the metals to electrically isolate them in case the environment became more severe.

Originally the armature bars were connected to the secondary iron framework.  The new Type 316 armature is now supported by  a high-strength, highly corrosion resistant molybdenum containing duplex stainless steel (UNS S32550) secondary framework. The original central angle iron secondary framework was retained after cleaning and application of both a zinc primer and epoxy coating. These layers protect it from further corrosion and help to electrically separate the iron from the stainless steel.

Type 316 stainless steel was also used to replace the circular stair treads, for emergency elevator components, and for a redesigned pedestal stairway. 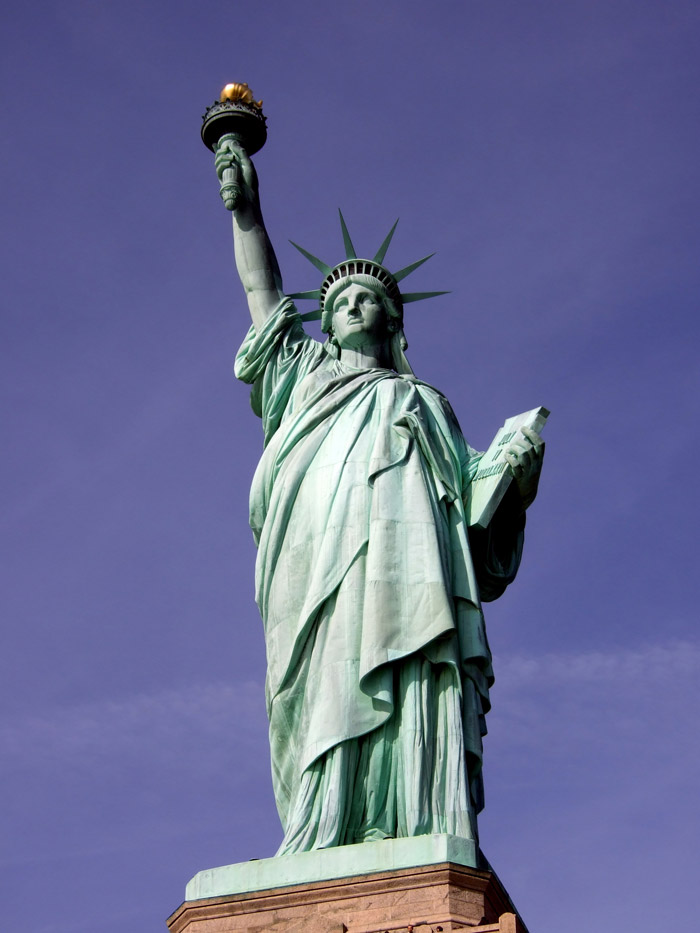 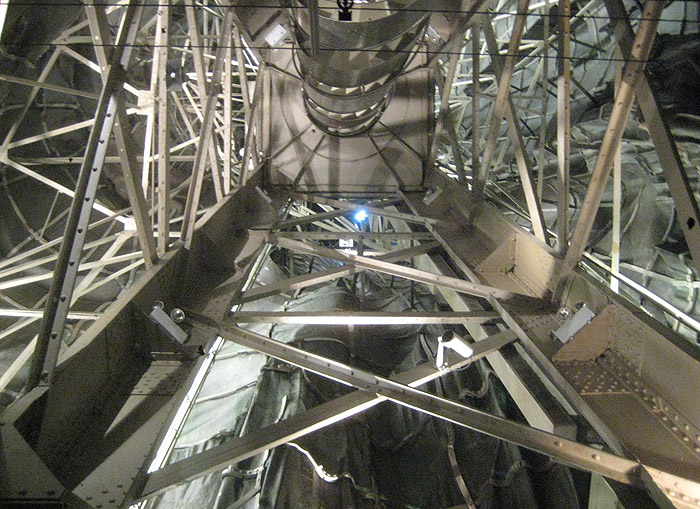