The Hassan II Mosque began to show structural deterioration shortly after its inauguration: the concrete walls, which were built into the Atlantic Ocean, started to crumble under the steady attack of the saltwater waves. After a spectacular re-construction, replacing large parts of the original structure and reinforcing it with 1,300 metric tonnes of moly-grade duplex stainless steel, the mosque is ready to withstand the elements for decades to come. 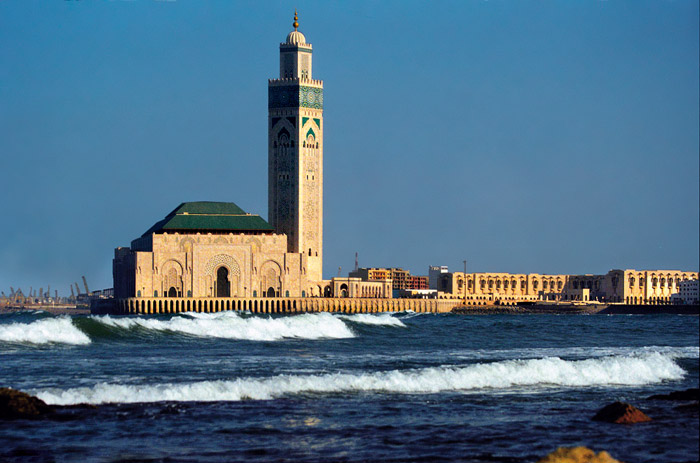 The Hassan II Mosque in Casablanca, Morocco, is one of the largest in the world. Its unique location partially extending over the Atlantic Ocean requires special protection against the aggressive saltwater environment.
Photo: Jerzy Strzelecki.

An architectural jewel
The Hassan II Mosque in Casablanca, Morocco, is one of the largest mosques in the world. Exceptional in its vastness and luxury, it was designed by the French architect Michel Pinseau and inaugurated in 1993 after seven years and 50 million hours of construction work by 35,000 workers and craftsmen. It has been built on reclaimed land, so that almost half of the surface of the mosque lies over the Atlantic Ocean.

The mosque’s prayer room measures 200 x 100 m and can accommodate 25,000 worshippers. It has a movable, 60 m high, 3,400 m² large roof, which can be opened in five minutes through a rolling chain mechanism. Part of its floor is made of glass, so that worshippers can kneel directly over the sea. This feature was reportedly inspired by the Qur’an verse: “The throne of God was built on water.”The front square can host an additional 80,000 wor-shippers. The minaret, standing 210 m high, is the tallest in the world.

A highly aggressive environment
The mosque extends over the Atlantic Ocean and is partially in direct contact with seawater. As waves beat against the concrete walls, saltwater migrated into the porous concrete. When it reached the carbon steel rebar inside, the rebar started to rust. As rust forms on the rebar, it expands and presses against the concrete from inside the structure, lead­ing eventually to cracking and loosening of the concrete and further penetration of the saltwater into the structure. Only ten years after its inauguration, this part of the mosque had deteriorated badly because of the corrosion of the rebar.

A reconstruction aimed to last 100 years
To remedy the problem, a major restoration project was launched in April 2005. Given the building’s importance, the authorities specified that the repaired structure should last 100 years. Three years of testing, study and review went into the design developed to meet the challenge. To meet the long-life requirement, the designers recommended the use of moly-grade stainless steel rebar combined with a concrete highly resistant to chloride penetration.

The rehabilitation work was performed in four phases over a four-year period:

“Unlike traditional projects, the renovation of the ocean-exposed portions of the Hassan II Mosque, whose durability is vital, was planned with exceptional design and construction conditions, upon request from the Moroccan government,” explains Pierre Bessières, Construction Manager.

After the structural design had been modified to address the impact of wave penetration and their absorption under the building, tests were carried out on a scale model in a wave basin. The quality of all materials to be used on the project had to be exceptional and traceability of all material production steps was required.

It is not always possible during the design process to foresee all the work necessary to meet design goals. The Hassan II Mosque project was no exception. During construction, it was discovered that 100 external pillars (referred to as “combs” because of their wave-breaking effect) exposed to the ocean and supporting the peripheral slabs also needed replacement. Here again, high-performance concrete reinforced with 2205 duplex stainless steel rebar was chosen. This work required instal­lation of an additional peripheral watertight curtain in the existing dike. 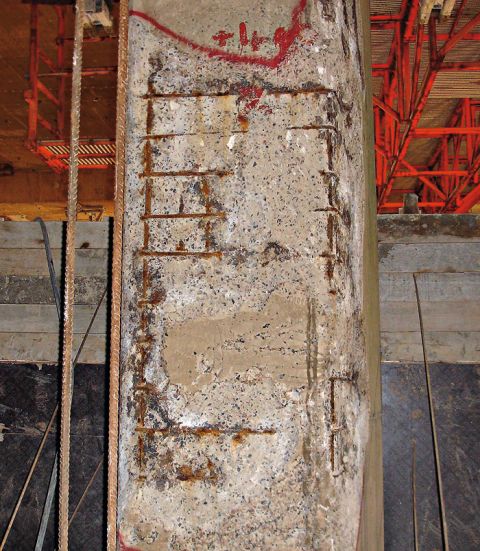 The maritime environment had taken a toll on the mosque’s ocean-front portions, leading to deterioration of the pillars under the prayer room. Photo: Ugitech.

Duplex stainless steel guarantees durability
“For us, the project to repair the portions of the Hassan II Mosque in Casablanca exposed to the ocean represented the supply of 1,300 tonnes of stainless steel cut to length for the customer according to their drawings and delivered by number of parts and not by weight,” indicates Bernard Demelin, Marketing Manager for Ugitech SA. “The use of stainless steel… in construction applications helps save both energy and resources,” he adds. Indeed, stainless steel offers not only a longer life and improved corrosion resistance in buildings and structures, but also requires less maintenance in the long term. Additionally, stainless steel is 100% recyclable and new stainless steel generally contains some 60% recycled scrap material.

Type 316/316L stainless steel with 2% molybdenum is a grade that is often used for rebar with maritime exposure. However, because of the size, location and importance of this project, 2205 duplex stainless steel was recommended instead. Its corrosion resistance is much higher than that of Type 316/ 316L, and its price was lower given the cost of raw materials at the time of construction.

Installation practices for the duplex grade are identical to those for traditional stainless steel, with the exception of a requirement for approximately 25% higher machine power due to the duplex steel’s higher strength. The 8–20 mm bars used in the Hassan II Mosque project have a yield strength of roughly 850 N/mm², while the 25–32 mm bars have a yield strength of roughly 650 N/mm². This compares to typical yield strength values of 500 N/mm² for similar Type 316/316L bars. The higher strength of the duplex alloy compared to Type 316/316L and other steels means that smaller bar diameters provide the same level of reinforcement as larger bars of lower-strength steel, another source of cost savings. 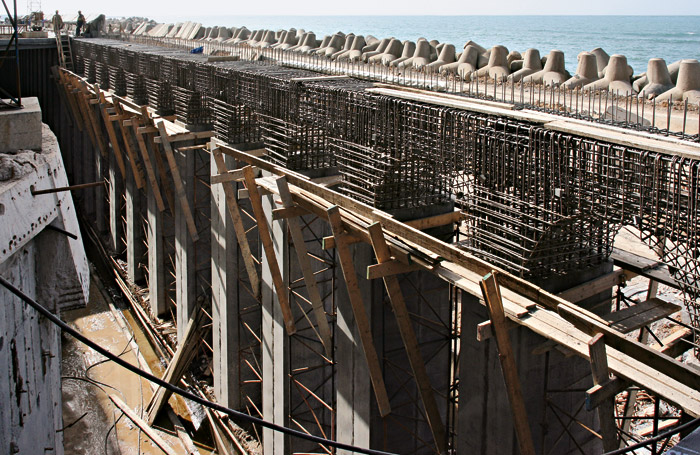