What was intended to be a weekend retreat for a wealthy Pittsburgh department store magnate and his family, "Fallingwater" now stands as one of the most iconic tributes to architect Frank Lloyd Wright. Molybdenum-alloyed Type 316L stainless steel plays a small but crucial role in preserving one of the greatest buildings of all time. 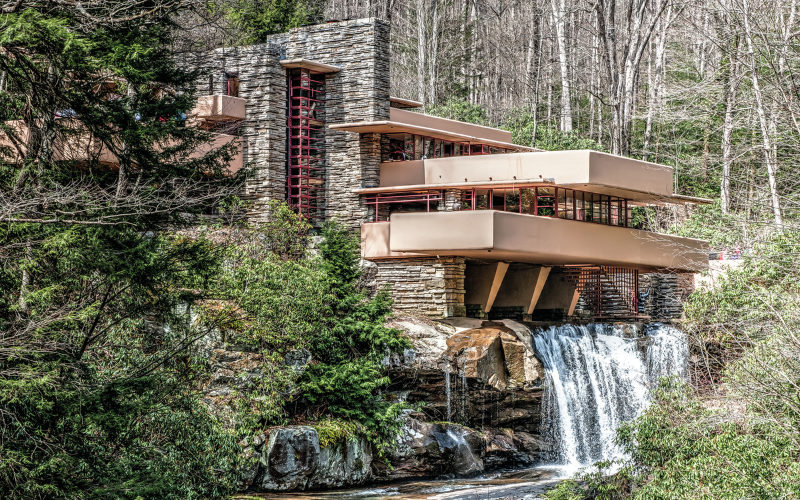 As Frank Lloyd Wright's most famous creation, Fallingwater welcomes tens of thousands of visitors each year. In 2015 alone, over 167,000 people travelled to the Laurel Highlands of rural southwestern Pennsylvania to see the legendary home. Fallingwater is defined by its relationship with the waterfall that traverses the property and spills out from beneath the living room. Wright famously told the Kaufmann's, the family who lived at Fallingwater, that "I want you to live with the waterfall, not just look at it, but for it to become an integral part of your lives". Yet, the idea to design a home physically integrated with its natural surroundings was not without structural challenges. By the 2000's key elements of Fallingwater were at risk of being lost forever. As part of an extensive restoration effort, Type 316L stainless steel was used in the famous staircase that leads from the living room into the river.

On the precipice of disaster
Although Fallingwater is an architectural marvel, reinforced concrete design and placement issues coupled with gravity, caused serious structural problems from the outset. A month after the Kaufmanns took up residence, deflection and cracking of the cantilevered portions of the house occurred. The second-floor master terrace contained the largest fissures. Engineers began monitoring and documenting the downward deflection of the cantilevered terraces.

An extensive computer analysis by Robert Silman Associates in 1996 confirmed that Fallingwater's terraces had continued to deflect or sag – one of them nearly 18 centimetres from its original position. These findings lead to a massive restoration effort, headed by Silman's engineering firm, to save the masterpiece before it collapsed upon itself into the Bear Run. After extensive evaluation, a system of steel cables or tendons was installed to relieve pressure on both the concrete and the existing steel reinforcement to check the sagging terraces.

Stairway to the waterfall
A unique feature of Fallingwater is a stairway leading from the living room to the head of the falls. It offers easy access to the stream and a plunge pool while providing ventilation for the home when the hatch cover is open. The original design indicated that the stair treads and landing were to be suspended from the east terrace using steel hangers. However, early pictures document that, in addition to the tread hangers, larger vertical steel members connected the bottom of the east terrace with the riverbed at the landing of the stairs. Over time the steel members have gradually become more substantial, as more vertical structural support was needed for the sagging terrace.

The mild carbon steel used in the original tread hangers of the "hatch" stairs corroded over years of exposure to the moist environment. At times, the staircase would become partially submerged during flood conditions. It also acted as a trap for flotsam and jetsam, adding additional stress to the steel supports. At one point, during a violent storm in the 1960's, the staircase was torn from the structure and had to be replaced.

To prevent the future weakening of the structure from corrosion and the forces of debris-filled storm water, restoration architects replaced the stair hangers and the reinforcement within the concrete treads and landing with molybdenum-alloyed Type 316L stainless steel. The same stainless steel was also chosen for the replacement of the structural columns at the landing that support the east terrace, which can be submerged into the stream after heavy rains. An additional benefit of this alloy is its impact resistance to flooding debris. A specifically formulated "Cherokee Red" paint that Wight claimed reflected both the color of iron ore and the fiery process used in steel-making was applied to blend the new stairs with the existing construction.

The legend lives on
With all its faults, Fallingwater stands as one of the most remarkable architectural achievements of the 20th Century. Molybdenum-alloyed stainless steel plays an important role in maintaining both the beauty and structural integrity of this priceless building.

Read more about story of Fallingwater