“Each autonomous, and yet together”

At the inauguration of the Nordic Embassies in Berlin in the autumn of 1999, Queen Margrethe II of Denmark formulated this motto, "Each autonomous, and yet together", for the future cooperation of the five Nordic countries. Twenty years later, this unique project is still making a statement about international friendship – and the lasting, low maintenance beauty of molybdenum-containing stainless steel. 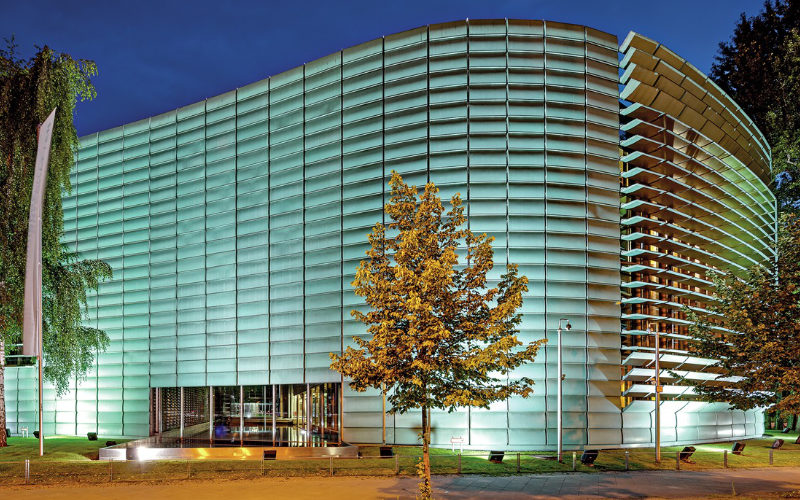 The Nordic Embassies are a complex of buildings where you can not only learn about collaboration between countries, but can also see this concept expressed in architectural form. A green copper band, which has since become a famous landmark, encompasses the cluster of individually-designed embassy buildings. The supporting structure of this 15-meter high band is made of molybdenum-containing stainless steel, just one of numerous applications at the Nordic Embassies.

Both united and unique
After the fall of the Berlin Wall and the reunification of Western and Eastern Germany in 1989, it was decided to relocate the seat of government back to Berlin. The five Nordic countries – Denmark, Finland, Iceland, Norway and Sweden – used this opportunity to realise the idea of a joint embassy complex. This unique cooperation was initiated not out of necessity but rather out of a sense of common heritage, common languages and shared values and convictions.

The overall concept of the site, designed by the Austrian-Finnish architects Berger and Parkkinen, perfectly captures the idea of a strong community. Arranged according to their location on the map, the embassy buildings are complemented by a shared cultural centre and event venue called "Felleshus". These six, uniformed-height structures are built in such a way as to create the illusion of sections that have been carved out of a single block. Intersecting paths and shallow ponds representing the seas simultaneously divide and link the buildings.

Each embassy building is designed by architects from its respective country and has its distinctive identifying features. What unites the buildings is the consistent use of materials typical of the Nordic region like wood and natural stone, combined with glass and stainless steel. In this interplay of materials, stainless steel can show off all its versatile properties: an elegant appearance in plain perforated façade panels, its corrosion resistance at almost invisible fixing points, and its strength in huge load bearing structures.

Find out how stainless steel plays an part in linking the embassies and the important role that molybdenum has to play.