Hundreds of thousands of vehicles hurry across the George Washington Bridge every day. The aging bridge is one of only three ways to enter Manhattan from New Jersey by car, and it sees more vehicle traffic than any other bridge on Earth. But it is in need of critical repairs. Coming to George's aid is Type 316LN stainless steel rebar, which will revitalize the crumbling concrete decks of this most important passageway. 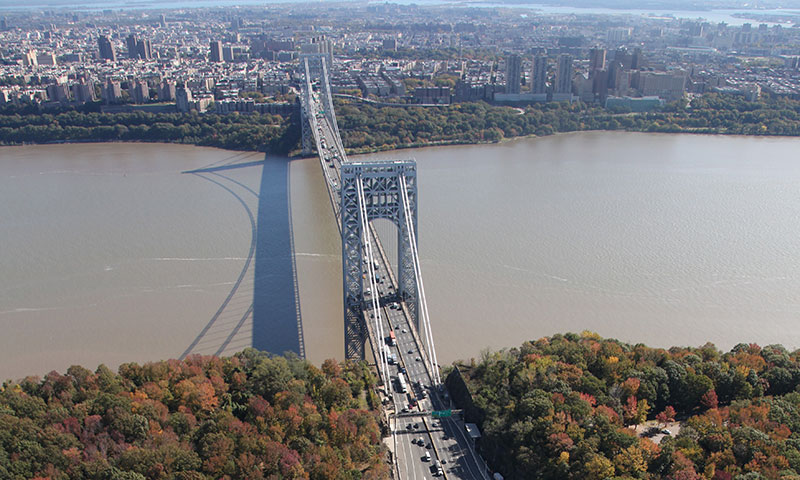 Its importance as a travel route means that any type of disruption poses a major challenge to both commuters and those tasked with maintaining traffic ﬂow.
When it debuted during the Great Depression, the George Washington Bridge was a state-of-the-art engineering marvel – twice as long as any other suspension bridge before it. The George is truly massive; its highest towers rise 185 meters above the Hudson, and its upper and lower decks carry eight and six lanes of traffic, respectively. Despite its size and grandeur, after nearly 88 years of heavy traffic, drastic temperature swings, and exposure to both de-icing and marine salts, this vital passageway is in grave need of repair. Indeed, minimal updates have been made to the bridge since 1961, when the lower deck was added. To meet current repair needs, the Port Authority of New York & New Jersey (PANYNJ), the owner of the bridge, is undertaking a decade-long, 1.9-billion-dollar rehabilitation initiative. 'Restoring the George' consists of 11 individual projects, each with staggered starting dates to minimize impact on traffic.

Currently, one of these projects is incorporating approximately 1,300 tons of Type 316LN stainless steel concrete rebar, for both pre-cast components and cast-in-place deck segments. This rebar will be integral to replacing the decks of the massive helix on-ramps and of the merging lanes that lead on and off the bridge into New Jersey. However, any construction has to be carefully planned to avoid the blocking of lanes, which would cause major delays to commuter traffic. To this end, work takes place only one or two lanes at a time, from midnight to 5am, mostly on weekends. The installation of durable stainless steel instead of lower-cost carbon steel rebar will help to extend the service life of the bridge decks signiﬁcantly, minimizing future repair, maintenance needs, and associated traffic delays.