To prevent the worst outcomes of climate change, renewable energy sources like wind and solar must more than triple their share of global power production. While molybdenum plays a role in several green technologies, it is particularly crucial in wind power generation. Therefore, as the demand for wind turbines increases, so will the demand for molybdenum in many of their components. 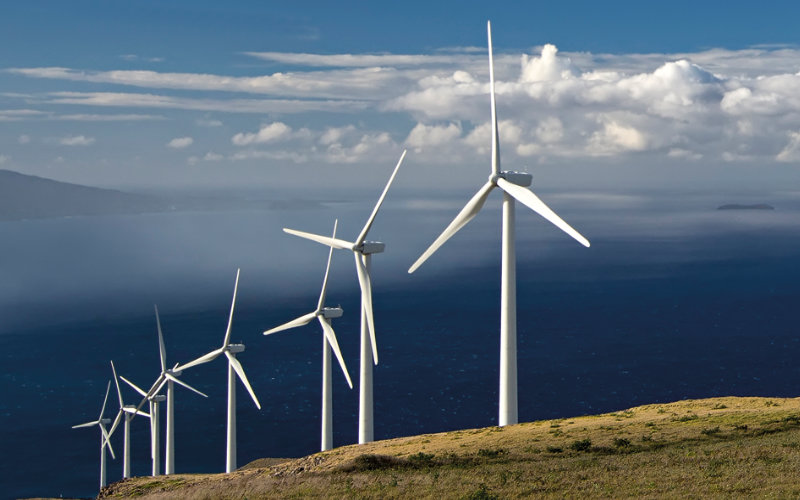 According to the World Meteorological Association, both 2020 and 2021 set new records for the level of greenhouse gasses in the atmosphere. And July 2021 was Earth's hottest month on record. The economic slowdown caused by the pandemic did little to curb ambient levels of greenhouse gases, despite a temporary decline in emissions. Too many essential activities like heating and transportation continue to rely heavily or exclusively on fossil fuels. According to the Intergovernmental Panel on Climate Change (IPCC), if the world keeps emitting at current levels, severe negative effects of climate change are expected, including extreme droughts and ﬂoods, mass human displacement and threatened food supplies. While renewable technologies, mostly wind, solar and hydropower, already account for 25% of all electricity generated today, their share will need to approach 80% by 2050. Vast quantities of both land and raw materials are needed to make this transition. Molybdenum is one such material – an irreplaceable alloying element that provides the mechanical properties needed to withstand the massive forces at play in wind power generation.

Overcoming drivetrain issues
Wind power generation focuses the huge and varying forces of wind caught by enormous blades onto relatively small gear teeth and other components. The immense stresses applied by the wind onto components can even damage or destroy the drivetrain. Gearless wind turbines or "direct drive" systems were developed to overcome gearbox failure and raise efficiency. In these systems, the rotor is connected directly to the generator, eliminating the drivetrain. However, most direct drive systems rely on large magnets made from "rare earth" (RE) metals like neodymium. This reliance poses potential supply risks, as demand for RE metals is increasing exponentially for renewables over the next decades. Other applications such as electric vehicles and consumer electronics are also competing for these critical resources. At the same time, RE mining and especially reﬁning is concentrated in just a few countries, adding to the supply risks. Fortunately, drive train issues can also be resolved by improving the gear steels with the addition of molybdenum. It increases the hardness, strength and toughness of these steels and its supply is not at risk. Major deposits are found throughout the Americas and China, making it geographically balanced.

Currently, gearless drive systems are used primarily in high-power offshore turbines and part of the 3 MW land- based turbines, mostly in Europe. But in addition to the supply chain risks associated with RE magnets, the future trend towards higher-powered onshore turbines also favors designs using gearboxes. Direct drive systems would require extremely heavy, cumbersome generators given the torque requirements of future designs, which makes their widespread use impractical.

Wind turbine overview
Currently, of all renewable technologies, wind power has the greatest potential for added molybdenum use.
Windmills require by far the largest amount of steel and iron castings, compared to other power generation technologies. While steel accounts for the vast majority of the tower weight (~98%), both materials ﬁnd use in components of the nacelle – the part of the turbine housing all generating components, including the gearbox. Regarding the latter, steel represents approximately half of the weight. Cast iron is mainly found in the nacelle (40%) and in the rotor (30%). The nacelle and rotor hub can weigh up to 900 tonnes in offshore wind turbines, not including the mass of the blades made from glass ﬁber reinforced polymers. Offshore windmills additionally require anchoring structures to the seabed, which are usually steel-fabricated monopiles or tripods.

Wind turbines are rated by the amount of power they can produce under ideal conditions and wind speeds. Onshore wind turbines currently operate at an average rated power of 3 megawatts (MW), but major turbine manufacturers have already started targeting the market for larger power output in the 5 MW range. For reference, 5 MW of a recently built wind turbine with a capacity factor of 42% is enough to power around 5,000 average-sized EU homes. Offshore wind turbines are much larger and capable of generating more power: currently they operate at 7 MW but designs for turbines generating up to 16 MW are being explored.

In Europe, the current onshore-to-offshore capacity ratio of 80:20 is not expected to change significantly. Other geographical regions operate a much lower share of offshore turbines, but are expected to approach the European ratio in the future.

The tower of a wind turbine consists of individual ring segments. These are 20 – 25 meter in length, produced from flat-rolled heavy plates made from carbon steel. Most modern wind towers have heights of 70 –140 meters and diameters of 4 – 5 meters. The latest and largest offshore towers are typically manufactured from steel grade S355 (AISI A276) having a yield strength of around 350 MPa (or 50 ksi). Since molybdenum is only required for the production of plate steels with yield strength levels of 500 MPa and above, it will not be used in the ring segments of the tower for the foreseeable future. But molybdenum plays an important role holding the tower together. Tower segments are usually assembled using nuts and bolts up to size M72 (diameter 72 millimeters). Typical bolt steel alloys fulﬁlling the high demands for strength and toughness are 34CrNiMo6 (1.6582) or 30CrNiMo8 (1.6580), containing molybdenum additions in the range of 0.2 – 0.5%. 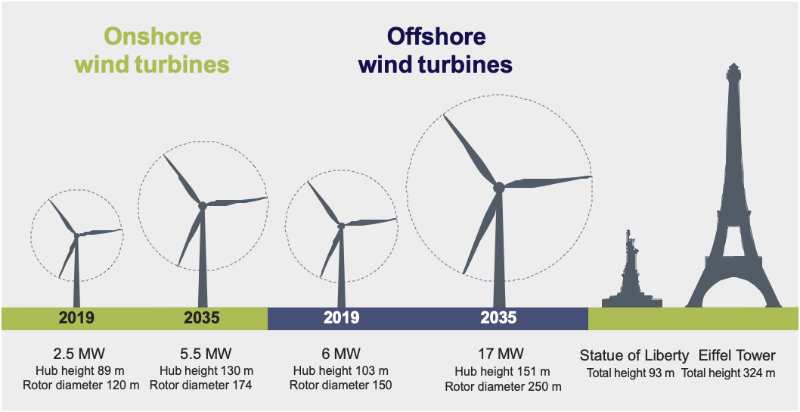 Size and power rating comparison of recent and future models of onshore and offshore wind turbines (Source: Berkeley National Laboratory). For height comparison, the Statue of Liberty in New York City and the Eiffel Tower in Paris are added on the right.

Discover how molybdenum, and results from previous IMOA research studies, is playing a crucial role as gear steels are facing more demanding performance requirements as the size and power rating of windmills increase.