The historic center of Stockholm, Sweden, stretches over 14 islands. The bridges that connect these islands are in constant use, so any maintenance closures cut off vital transportation arteries. A solution that spares future generations from disruption was therefore crucial for the renovation of the city's busiest rail bridges: the four Söderströms. The new molybdenum-containing duplex stainless steel superstructure will provide enough strength and corrosion resistance to outlast the 120-year design life, with minimal upkeep. 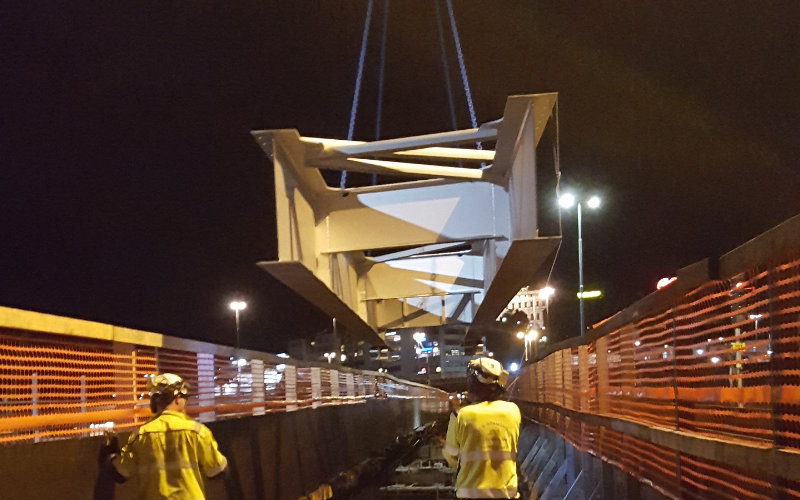 The Stockholm archipelago, like many settlements on the water, cannot function without a network of bridges. Over 340,000 people move across its Söderström rail bridges every day. But after 60 years of heavy use, they needed serious repair. In 2013, local traffic authorities determined that while the foundations were in good condition, the carbon steel structures that undergird the tracks were badly corroded. The bridges also surpassed their specified fatigue life. Hence, in 2017, an effort began to replace all four aging carbon steel structures with 2404 duplex stainless steel. Each of the Söderströms is 192 meters long and consists of 12 prefabricated sections. In total, the new rail bridges are the longest ever made with stainless steel.

Structural duplex: more than meets the eye
When duplex stainless steel (DSS) bridge structures first came to market, they were praised for their beauty. Whimsical designs such as Singapore's Helix bridge come to mind. But designers increasingly think beyond aesthetics with DSS, harnessing its strength and corrosion resistance even in non-visible applications, to create lighter structures that use less material and require less maintenance than their carbon steel predecessors. All DSS grades are at least twice as strong as Type 316 stainless steel. They also offer good weldability, making them suitable for a wide range of applications. The longer service life and lowered maintenance requirements conferred by DSS make these structures increasingly popular around the world. Even though structural use of DSS is now established in design codes worldwide, carbon steel continues to dominate the bridge building market. Carbon steel bridges are perceived as less-expensive than stainless steel. They've also been around for over a century and enjoy familiarity within the bridge building and maintenance industries. Building steel bridges with duplex stainless steels, by contrast, began in the 2000s and is generally thought of as costly.

The real cost of a "lower cost solution"
The Stockholm archipelago is a marine environment with brackish water and deicing salt use in winter – a double threat of corrosion. Without the anticorrosive benefits of chromium, molybdenum and other alloying elements, a carbon steel bridge must be painted or otherwise protected to resist such harsh conditions. At first glance, carbon steel appears less expensive at €2 million for the four substructures – the duplex stainless steel ones cost double that at €4 million. But these figures are misleading; they only consider the initial fabricated cost. In fact, the carbon steel structures are expected to have a much higher overall cost during their life cycle, as they would need to be repainted every 30 years – three times over the 120-year design life. Repainting and repair costs, which do not include indirect costs from rail closures, are estimated to amount to €60 million over this time – 30 times the initial material investment. Looking at the total life cycle costs, the duplex design is considerably less expensive. While all steels are 100% recyclable, the duplex stainless steel option also has a lower environmental footprint. The structure will not deteriorate over time if the stainless steel is correctly chosen. With proper care and specification, stainless steel can achieve a nearly unlimited life expectancy. It also does not require any environmentally hazardous surface treatments to protect it from corrosion. Such coatings or paints degrade over time and risk polluting the environment as they spall and chip off. They require regular inspection, touch up every few years and, eventually, complete removal and re-application every 25 – 30 years. This sounds simple enough but implies closing off the bridge, installing scaffolding, encasing it completely to capture the paint fragments that are blasted off to prepare the surface before applying the new coating and proper discarding of the old paint. Any such maintenance work also carries a certain risk of injury for the people involved. Duplex stainless steel largely eliminates these potential health and environmental costs. The Swedish traffic authority, Trafikverket, also estimated indirect costs to the public due to the temporary loss of infrastructure amenities during repair and maintenance of a carbon steel structure at a further €1.3 billion over the 120-year span. This underscores the region's dependance on these bridges and the immense disruption caused by closure for maintenance and repairs.

Discover more about the construction and installation of the bridges ...