Strong steels are sensitive to hydrogen-induced failure. Molybdenum alloying can ease the pain.

"Hydrogen economy" is a mantra of our times, making environmentalists dream of a carbon-free future and enthusing investors placing their financial bets. Prerequisites for a large-scale use of hydrogen in the intended range of applications, including energy delivery, steel making, chemical processing and transportation, are its efficient generation, preferably using renewable energy sources, as well as its safe transportation and storage. 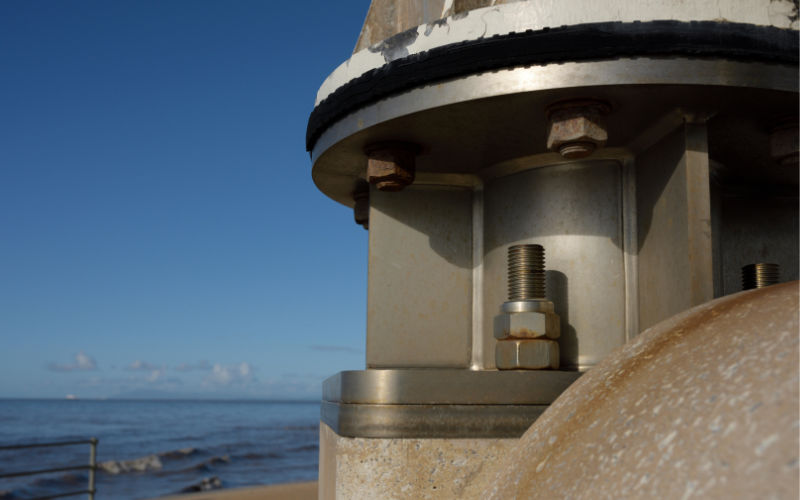 Without any doubt, much of the necessary infrastructure will have to be made from steel. Yet, the contact of hydrogen with metals and in particular high-strength steels can cause unfavorable effects on the material performance under specific circumstances. More precisely, the coincidence of atomic hydrogen absorbed by the steel, high yield strength and a localized three-dimensional stress state promotes premature failure of a component even when loaded below design stress. What makes matters worse is that failure often does not occur imminently with the application of a load, but only after some time. The so-called delayed cracking has been observed appearing even days after manufacturing (Figure 1) or taking components into service, and is thus a serious concern regarding quality monitoring. 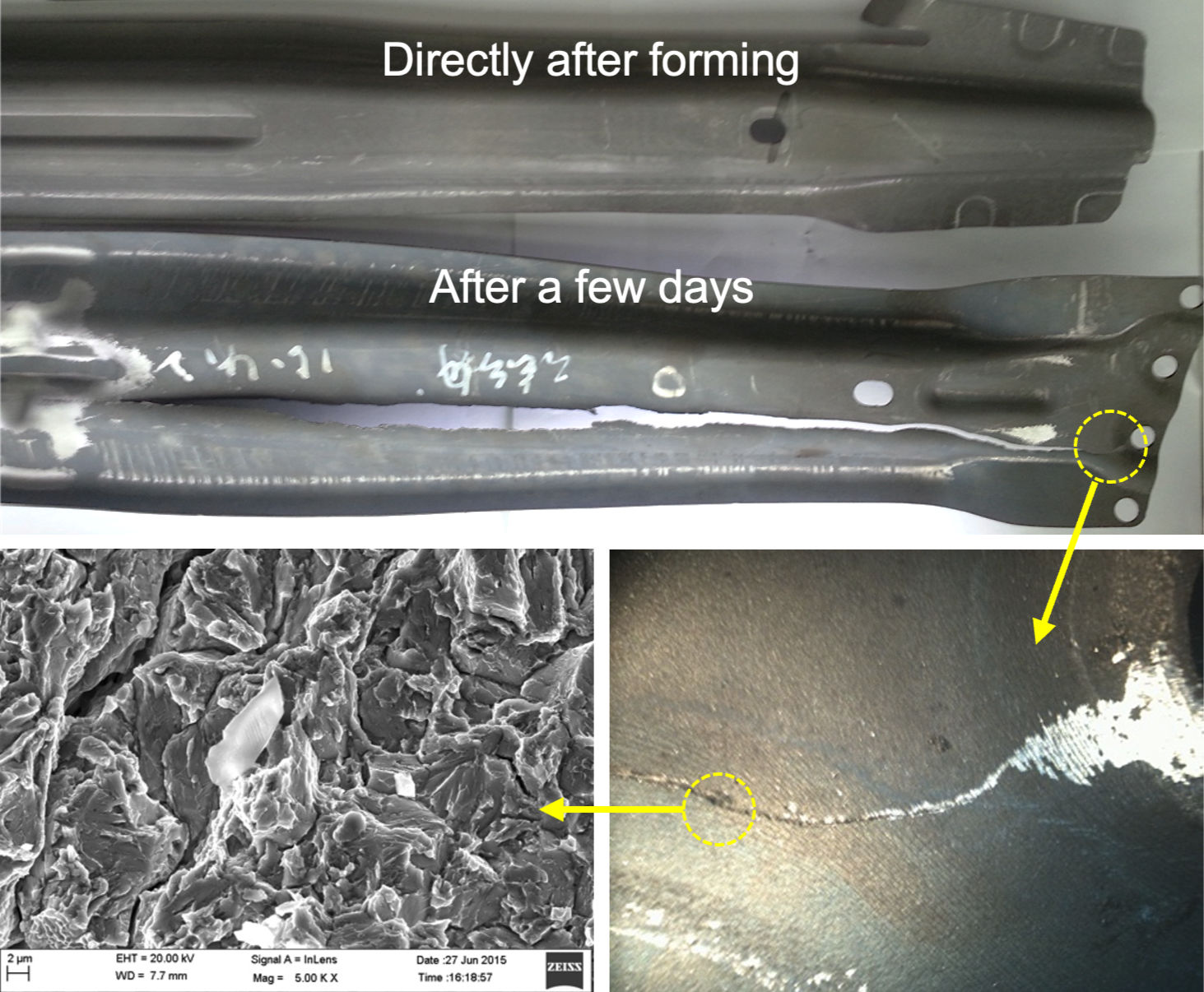 Hydrogen embrittlement (HE) is caused by residual hydrogen accumulated within the bulk of the steel during prior processing, such as steel making, galvanic treatments or welding. Alternatively, embrittlement might result from the exposure of steel to a hydrogen-containing or corrosive environment during service. Procedures have been developed to reduce hydrogen uptake into the steel during processing or to remove it before applying any service loads. The potential in-situ hydrogen uptake during service life requires protective measures, for instance by passive or active corrosion control. In either case avoiding hydrogen absorption into steel is a tedious and costly exercise. On the other hand, various efforts have been taken to develop high-strength steels with an intrinsically better resistance against hydrogen embrittlement. This approach builds on optimizing microstructures and involving superior alloying concepts.

To be successful in that respect, one needs to understand the mechanisms that generate hydrogen-induced material failure. Hydrogen gas is made up from bi-atomic H2 molecules. However, hydrogen dissolves in steel only as a single atom. Therefore, a process of dissociating H2 molecules at the steel surface is needed. Since the hydrogen atom has the smallest size of all chemical elements, it can travel very easily through the steel lattice by the process of diffusion. The classical interpretation of hydrogen-induced damage is that single hydrogen atoms diffuse to voids or cavities inside the material and recombine there to bi-atomic molecules, thereby gradually building up an internal pressure triggering damage such as the formation of blisters or internal cracks (Figure 2). This mechanism, which is rather relevant to lower strength steels, does indeed occur, especially in situations where an abundant hydrogen supply prevails. 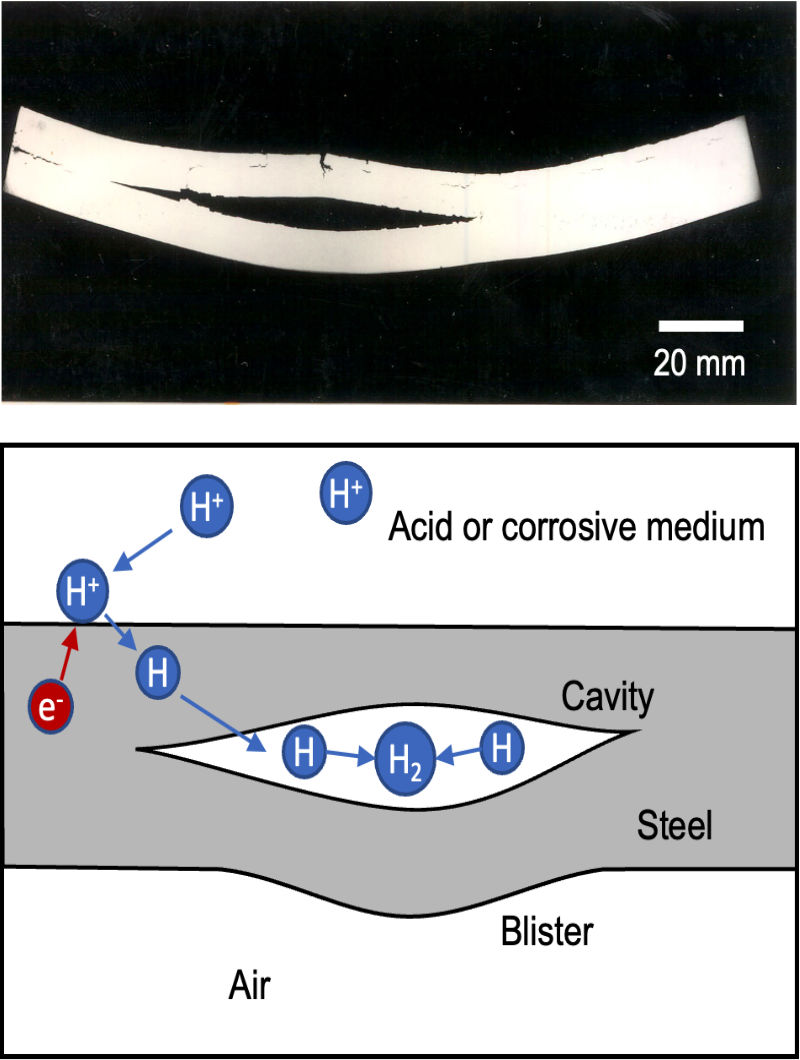 Figure 2: Mechanism of hydrogen absorption from a corrosive reaction and recombination of atomic hydrogen in internal cavity leading to blister formation.

On the contrary, just the presence of an extremely small amount of hydrogen can cause damage in ultra-high strength steel. The critical level of hydrogen decreases with the increasing strength of the steel. The threshold may even be below one part per million (weight ppm) of contained hydrogen for steels in the 1500 to 2000 MPa strength range. The small quantity of hydrogen is rather homogeneously distributed in the steel matrix in the absence of stress. Yet, after applying a load, hydrogen is attracted to areas where a three-dimensional state of tension stresses prevails. This three-dimensional stress state is likely induced by geometrical notches and at microstructural inhomogeneities, such as hard inclusions or pre-existing crack tips. The locally widened iron lattice in the stressed area is an energetically favorable site for accommodating hydrogen atoms. Other attractive sites for hydrogen aggregation are zones with disordered lattice structure such as grain and phase boundaries. The locally elevated concentration of hydrogen has the effect of weakening the bonding strength between the iron atoms or reducing the cohesion of boundaries. Thus, a relatively low stress level is sufficient to separate the material, producing a crack. This damage mechanism is known as hydrogen-enhanced decohesion (HEDE). Recent investigations have indicated that in martensitic press hardening steel hydrogen-induced boundary decohesion can occur at stresses as low as 400 MPa, while the nominal yield strength of the steel is more than 1000 MPa. Consequently, the crack propagates along the grain boundary in an entirely brittle fashion generating the facetted fracture surface characteristic of so-called intergranular fracture (Figure 3a).

While the appearance of intergranular fracture indicates the action of hydrogen embrittlement, other damage mechanisms caused by hydrogen are more difficult to recognize. Hydrogen-enhanced local plasticity (HELP) increases the mobility of dislocations, especially in the vicinity of stress-raising discontinuities such as notches, crack tips or inclusions. The action of the HELP mechanism is often associated with so-called quasi-cleavage fracture (Figure 3b) combining mostly brittle appearance with some remnant plastic deformation. Increased dislocation activity promoted by HELP, on the other hand, generates increased amounts of vacancies, which are point defects in the iron lattice – think of an empty lattice position. The mechanism called hydrogen-enhanced strain induced vacancy formation (HESIV) energetically facilitates the formation of such point defects and stabilizes them. These vacancies can condensate into two-dimensional defects (Figure 3c), which in turn may coalesce and form voids. The resulting dimple-type damage appearance resembles that of a ductile fracture. HELP and HESIV are activated at stress levels closer to the nominal yield strength and hence may be considered less precarious than HEDE.

All three hydrogen-induced damage mechanisms require time allowing hydrogen to diffuse and damage features to incrementally develop. Accordingly, macroscopic cracking occurs with a time delay upon putting the component under stress. Hence, the time-to-fracture is an indicator for the intrinsic hydrogen damage susceptibility of a steel grade. This parameter is determined by applying a constant stress to a steel sample after defined hydrogen charging, then recording the time until cracking occurs. The longer this incubation time, the more resistant the steel.

Molybdenum alloying to ultra-high strength steels was found particularly beneficial, to making it less susceptible to hydrogen-induced cracking. This was demonstrated in a recent IMOA project, which developed a 2000 MPa press-hardening steel to be used for automotive body components (Figure). By adding up to 0.5 %Mo to the base alloy, the time-to-fracture is increased from around 30 to over 120 hours (Figure 4). Combined alloying with niobium further increases the crack incubation time to over 180 hours. 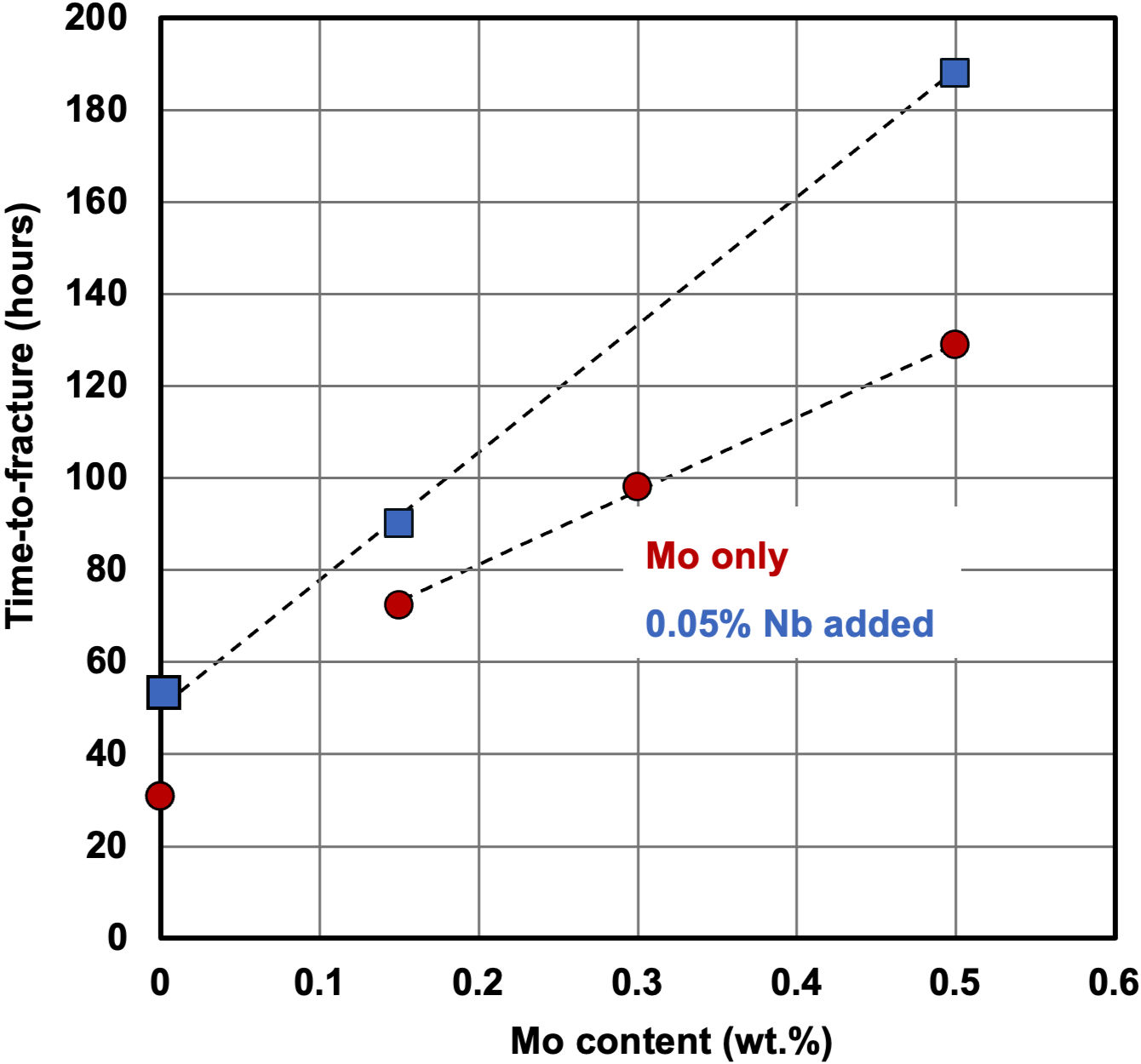 It has been observed for quite some time that molybdenum alloyed ultra-high strength steels show superior performance in applications favoring hydrogen uptake into the steel. This has been evidenced for high strength steels used in bolts, oil country tubular goods or abrasion resistant components in the form of longer service life or higher applicable service stress. Based on such results, alloy design optimization guidelines (Figure 5) recommend reducing impurities such as phosphorous and sulfur, lowering the manganese content, as well as refining the microstructure by niobium microalloying. Increasing the molybdenum content produces the beneficial effects outlined above. From a hardenability point of view, molybdenum is a preferable alloying element. It is approximately 2.7 times as effective as manganese in suppressing the formation of softer phases. Therefore, the recommended reduction of the manganese content can be fully compensated with an accordingly smaller molybdenum addition. Last but not least, molybdenum alloying provides excellent tempering resistance ensuring superior combinations of strength, toughness and hydrogen-cracking resistance can be achieved. 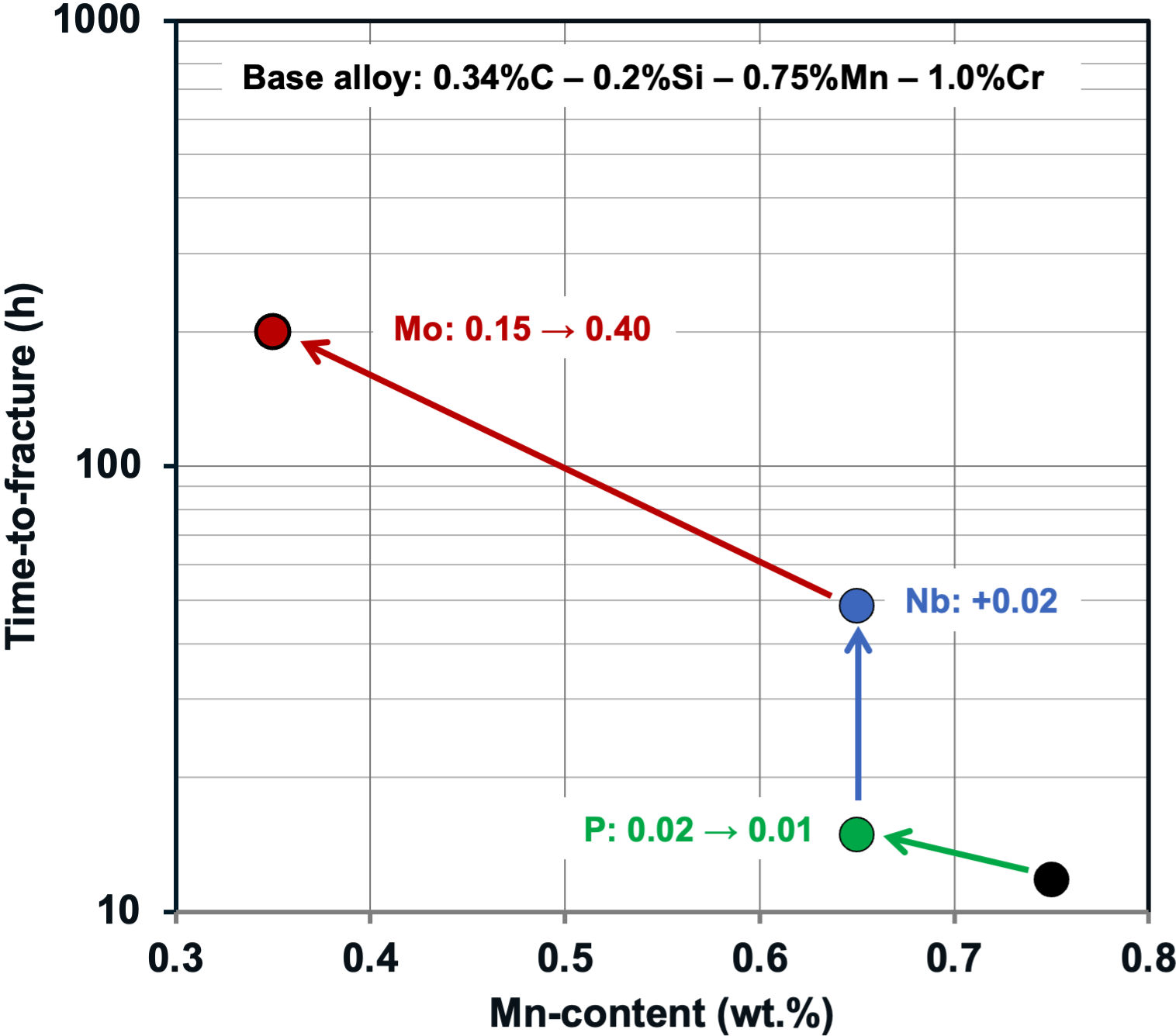 Recent research on molybdenum's metallurgical effects will allow a more precise application of molybdenum in future generations of ultra-high strength steels, ensuring both high quality and cost-effective outcomes. These steels will play a significant role in the continuing general trend of light weighting structures, including making vehicles lighter, safer and more sustainable. As the hydrogen economy continues to grow and is seen as a viable alternative to fossil fuels, there will be a clear requirement for hydrogen extraction and delivery infrastructure, resulting in a substantial demand for hydrogen resistant steels. Molybdenum alloying offers a highly effective solution to this problem.