Perched high on a hill above Los Angeles, the Getty Center holds some of the world's greatest artwork. Just as impressive as the artwork is the pioneering resilience and sustainability of the architecture on this monumental site. Rough-cut travertine stone sets the theme on the outside, both as wall cladding and pavement. Supporting and anchoring the heavy stone façade, molybdenum-containing Type 316 stainless steel has an invisible but critical role. 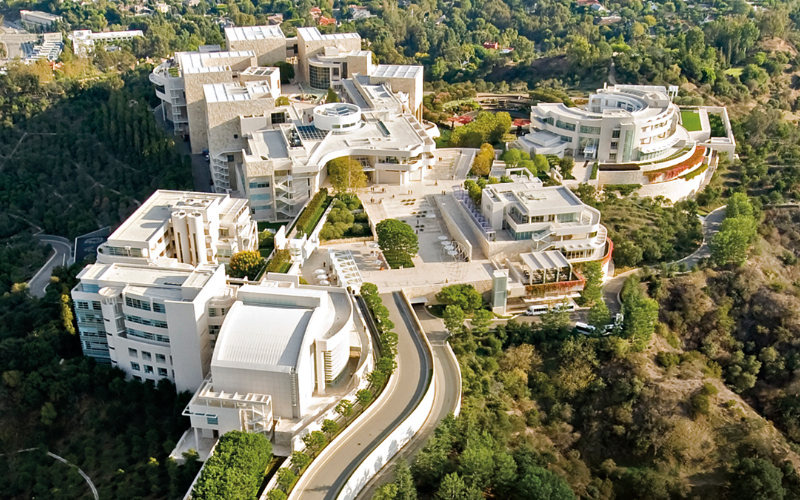 John Paul Getty was once the richest private citizen in the world and an avid collector of arts and antiques. After his death in 1976, his entire property was turned over to the Getty Trust. When the museum outgrew its original location at Getty's former residence in Malibu, California, management of the trust looked for a suitable site that would be more accessible from Los Angeles. The trust also wanted to consolidate all its entities at the same location. They found a large, rugged piece of land, at the top of a hill in the Santa Monica Mountains, with stunning views of both Los Angeles and the Pacific Ocean. The Pritzker Prize winning architect Richard Meier was chosen to design the campus in 1984.

Picturesque as it is, the Getty's coastal location is subject to both wildfires and earthquakes. In fact, southern California is one of the most seismically active places in the world. The likely impact of such natural disasters, and also of atmospheric corrosion near the sea, must be considered in the construction of the area's buildings. At the Getty Center, Type 316 austenitic stainless steel helps to address all three issues in a variety of applications. For example, austenitic stainless steels in general are very ductile and tough, so they absorb energy from an earthquake or other impacts exceptionally well without breaking. The two percent molybdenum in Type 316 stainless steel adds high-temperature strength in fires and corrosion resistance in chloride containing coastal environments. Therefore, this alloy contributes to a design that is as durable and resilient as it is sustainable. Indeed, over 20 years after it has been installed, the stainless steel shows no signs of corrosion or degradation and looks as good as it did the first day.

Find out more about the crucial role that Type 316 molybdenum-containing stainless steel plays to keep the façade clean, safe and secure in the earthquake and fire prone environment of coastal Los Angeles.

Read more about the story of the Getty Center