Impact of high strength steels in automobile manufacture: the past, present and future.

Since the first car rolled off the production line in the early part of the last century, the most established material in body construction has been steel. Steel's dominant position continued for almost a century until the 1990s, when it began to be challenged by low-density materials such as aluminium, magnesium and even plastics, either for the entire body construction or specific, individual components. 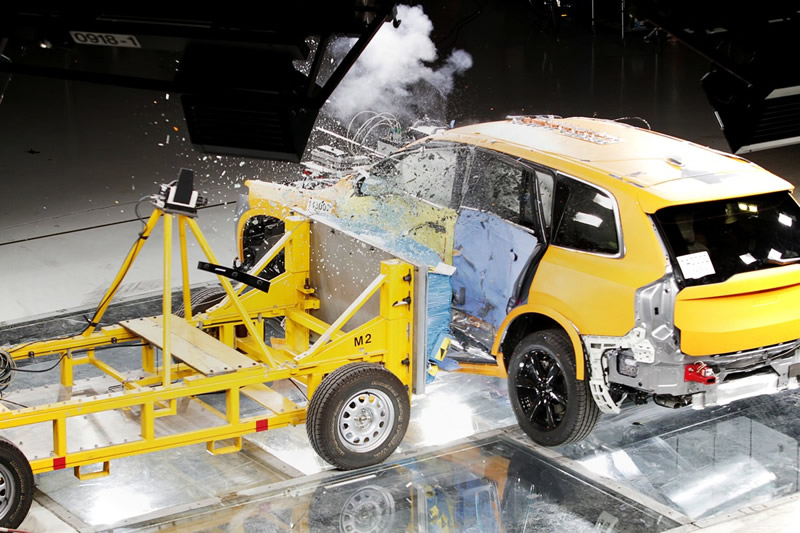 The emerging rivalry with low-density materials motivated the steel industry to develop new steel grades, capable of competing in the race for lighter, better performing and cost effective body structures. These new structures would prove to be inherently safer.

A quick inspection of the older, now 'classic', vehicles of previous decades, invites a comparison with the vehicles of today. Even to the untrained eye, the difference is palpable.
Lighter, longer lasting, safer and infinitely more environmentally-friendly would sum up the modern vehicle in comparison to its predecessors. While the path to the development of the modern vehicles of today has not been easy, close liaison between the steel and car manufacturers has achieved significant results and improvements since the gauntlet was first thrown down.

Today's vehicles – how we got there
The protection of passengers is key in the development of today's motor vehicles. This protection, coupled with the need to keep the vehicle's weight to a minimum requires materials of construction that have both high strength and toughness, but are also light and flexible.
Press-hardened steel (PHS) provides these properties and has therefore become the staple of the modern auto body crash structure. As manufacturers continue the drive for safer and lighter materials in vehicle production, the benefits of molybdenum have an increasing role to play in these exciting developments.

Refining safety and efficiency with the help of molybdenum
The journey to today's safety standard of vehicles has been a long and bumpy one. During the first 15 years of press-hardened technology, the major focus of development was on the efficiency of the process. In recent years, the focus has shifted, and material improvement is increasingly important.

The original press-hardened steel, known as grade 22MnB5 was not specifically designed for use in automobile bodies, but could reach a tensile strength of 1500MPa. However, for cars impact resistance, represented by the property called 'toughness' is extremely relevant. The higher the toughness, the more energy can be absorbed in a crash before failure.

The Swedish car maker, Saab, used the first press-hardened components to reinforce the doors of their 9000 model, but the process was slow because of the need for complex, costly and less productive equipment than conventional stamping.

Press hardening saw only limited use, but in 2004 there was a significant breakthrough when Volkswagen achieved major improvements in process efficiency and deployed seven press hardened components in its high volume and popular Passat model. Press hardening technology then progressed quickly and today almost all vehicles contain press-hardened parts.

However, it was only five years ago, in 2014, that Volvo took the technology to an unprecedented level in its second generation XC90 SUV. Almost 40% of the car's body structure is made from press-hardened steel, creating a virtually indestructible safety cage to protect the passengers inside.

As manufacturers are moving towards increasing the tensile strength of press-hardened steel towards 2000 MPa, in order to further reduce its weight, the interaction between strength and toughness has taken on even greater importance. It's been clearly established through projects supported by the International Molybdenum Association (IMOA) that molybdenum additions to such steels can provide a marked improvement in the combination of strength and toughness. Molybdenum acts as a form of 'glue' between the microstructural features within the steel, holding them together under extreme loads. It also helps reduce the deleterious effect of hydrogen, known as hydrogen embrittlement, by limiting its mobility within the material.

Already, effective use is being made of molybdenum, thanks to newly-developed press hardening techniques. The first commercially available 2000 MPa press hardened steel contains 0.15 to 0.20% molybdenum, while a recently developed 1500 MPa grade containing molybdenum is being used for thicker sections for heavy truck components. The addition of molybdenum significantly boosts the steel's hardenability, permitting improved hardening of thicker sections.

Since 2015, car manufacturers in the EU have been penalized for exceeding an average CO2 emission of 130 g/km across their new car fleet and this limit will be reduced to 95 g/km by 2021.

Reducing vehicle weight is one means of lowering fuel consumption and will become an increasing priority as emission limits decrease. Field tests have indicated that fuel savings range from 0.1 to 0.5 litres per hundred kilometres for a weight reduction of 100 kilograms. This corresponds to CO2 emission reduction of eight to 12 grams per kilometre.

Lightweighting has therefore been vigorously pursued over the years as a solution to meet decreasing emission targets in parallel with other initiatives.

The conflicting demands of lighter, bigger and safer vehicles can only be satisfied by using materials that have either higher strength and/or lower density.

Growing demand for electric vehicles
As the importance of sustainability in our modern world continues to grow, the demand for electric vehicles (EVs) is set to increase. The use of high strength steels in EVs may be even more crucial for light-weighting, to offset the weight of the battery pack and press hardened steels will almost certainly be used in the battery cage, to protect the battery from damage. Yet another consideration for EVs is the need to strengthen the front end against collision impact, to compensate for the absence of an engine block. Heavy-gauge press hardened steel is being considered as a potential solution.

A future containing molybdenum
Of course, there is still much to learn of the benefits of molybdenum addition on the properties of steel. IMOA continues to play a key role in identifying these effects in steel and in using this knowledge to develop improved alloy solutions. The resulting increase in the understanding of how molybdenum benefits its key users will undoubtedly widen its appeal.

Press-hardened steel in modern day cars and trucks is just one example of an application which demonstrates that molybdenum can significantly improve existing steel grades. And as demand for ever-lighter and safer cars continues to grow, the demand for molybdenum will increase too.